This is a Lyngshest horse from Norway, a close relation to the Icelandic. Here Peter, Neisti, and Tinka the border collie are herding sheep in the mountains of Norway. Tinka works independently at such far distances. And I swear by Neisti's ears that horse is looking for sheep also. On steeper parts of the trail, I had my eyes closed.
I wonder what types of obstacles this would require in a Working Equitation class and how the longer legged horses would do. ;-) Check out the trail maps at the beginning of the video showing the rough, steep, terrain that had to be negotiated.
Posted by Blessiowner at 4:30 PM 2 comments:
Email ThisBlogThis!Share to TwitterShare to FacebookShare to Pinterest
Labels: icelandic horse video

At the 2016 World Equestrian Festival in Aachen, Germany, the best horses and riders in the world compete in dressage, jumping, eventing, driving, and vaulting watched by 350,000 attendees. Co-sponsored by Sweden, the opening ceremonies featured Icelandic horses, royalty, mounted knights, and the most amazingly pink dalarhästars.

Posted by Blessiowner at 10:49 PM No comments:
Email ThisBlogThis!Share to TwitterShare to FacebookShare to Pinterest
Labels: icelandic horse video

Riding Through Iceland-- A View with a Drone

Thanks to Stori Kambur you can now have a drone's eye view of riding through Iceland.
Posted by Blessiowner at 1:24 PM No comments:
Email ThisBlogThis!Share to TwitterShare to FacebookShare to Pinterest
Labels: icelandic horse video 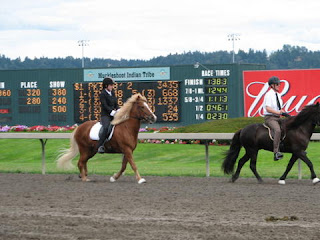 Blessi must have been on a competition track before.  He was quite calm in the warm up area (which was a parking lot) and he was not at all bothered by the crowds, loudspeaker, track equipment, or thoroughbreds barreling out of the start up gate right in front of us.  When Blessi got on the track the first year at the Parade of Breeds, he wanted to run all out.  Svanny did some half halts and he kept in gait.  The second year, Blessi knew that he was only suppose to tolt and was not so wound up. 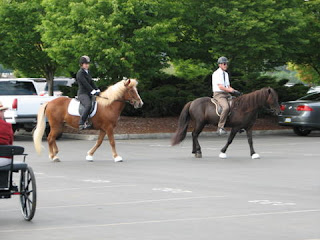 Both years, the Icelandics were one of the few breeds that could be ridden on the track--as opposed to being led  And they were the only breed ridden in a snaffle bit.  One rider rode her Arab in an 8 inch shank bit and used it to control the horse.  The owner of an Andalusian (I think) asked if the Icelandic riders would go down the track with her so her horse had some "friends."
Blessi say his first train at Emerald Downs.  The train ran in the distance but you could see it and hear from the parking lot.  He was in the cross ties and got a bit antsy--moving his butt around but not pulling on the lead line.  I untied him and started walking him around the parking lot and he was fine.  Blessi knew that if that horse-eating train came after us he was faster than I was and it would eat me first.

Posted by Blessiowner at 8:50 AM No comments:
Email ThisBlogThis!Share to TwitterShare to FacebookShare to Pinterest
Labels: blessi

Blessi and the Exercise Leggings

Blessi developed a foot abscess several years ago.  Here is what we rigged up to help Blessi. I sacrificed one of my exercise leggings from the 80s to prevent the protective boot from rubbing. We put the boot on Blessi and duct tapped the top of the boot to prevent the tie from coming loose. 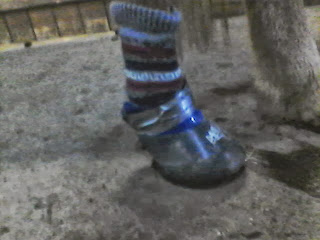 I gave Blessi a bath and took him into the arena (without the boot).  When I turned him loose, he immediately rolled and became a muddy pony.  When he got up, he cantered about the arena madly by himself.  I wasn't sure if this was due to the pain masking effects of the butte or to a recovery so I didn't let him run around too much.

The abcess never broke as far as I can tell.  Looking back, I believe the problem was gravel stuck under the frog which the farrier did not trim correctly.  I have since changed farriers.
Posted by Blessiowner at 10:17 PM No comments:
Email ThisBlogThis!Share to TwitterShare to FacebookShare to Pinterest
Labels: blessi

Here's a team competing in Mounted Cowboy Shooting.  The second rider is on on Blair the Icelandic.  Go team! Go! 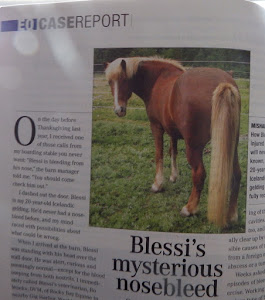